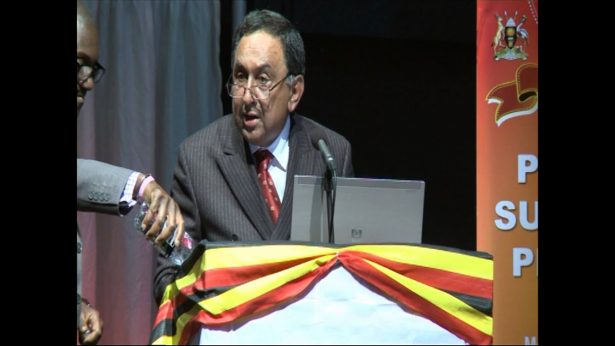 Lord Sheikh is a serving Lord in the house of Lords and one of the most successful Ugandan Asian businessmen in the UK chairing 4 successful companies. Jambo Sana was the greeting tag line he used to greet delegates amid applaud. He said that he may be an active serving Lord but at heart is just a simple Indian who was brought up in Uganda, thanked Mr. Mutenza for asking him to speak on a key subject of attracting UK investment in Uganda.
Being an active member of the House of Lords he stressed that he speak on a variety of subjects which includes business, trade and foreign affairs and very keen for UK business to take business to foreign countries including Uganda. In the House of Lords he emphasizes that this is the right time for British companies to invest in Africa.
Lord Sheikh referred to the 7% good club and they are now 9 African countries which achieved more than 7% growth this year. In Uganda the GDP growth has been at average of 6.5% for the last 20 years and he pointed out that it will not be long before Uganda joins the 7% club. Uganda is one of the fast growing economies of Africa.
In 2012 Uganda GDP was over 20billion dollars. UK is Uganda’s largest foreign direct investor with investment worth over 1.1billion dollars. UK has historical ties with Uganda and believes if the ties are strengthened further will create more business links and opportunities for the two countries. For a full report visit http://www.ugandanconventionuk.org