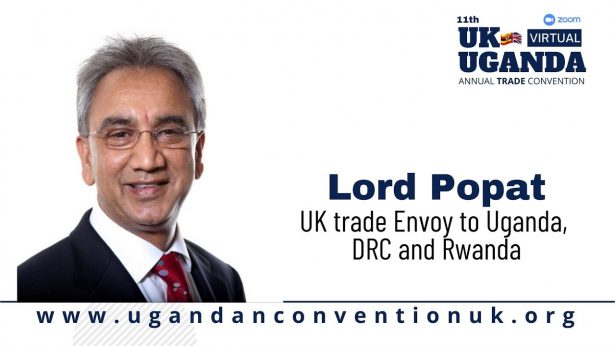 “Lord Popat, UK trade Envoy to Uganda stressed that despite Covid-19 and Brexit, UK has continued to make significant progress and has been able to win £2.379Bn of projects in Uganda, with UK content value of £523m. This shows that the UK is a trusted partner, and the President frames our relationship through the prism of trade and investment opportunities. “

Lord Popat further shared some details of the exciting deals that have arranged.
1. McDermott – Our greatest recent achievement in Uganda has been with the UK firm McDermott who were recently awarded a $1.9bn deal in relation to the Tilenga Oil Project. This represents the largest deal for a UK company in Uganda to date. I have been involved with the deal since 2016, which started with my involvement with Energy Industries Council (EIC). I invited McDermott to join my Oil and Gas delegation to Uganda and I also arranged meetings with His Excellency President Museveni to support the project. Credit goes to our former High Commissioner Peter West and current High Commissioner Kate Airey.
2. Uganda Airlines Direct flight – Uganda Airlines is in the process of applying for a direct flight to the UK. Once finalised this will open up new opportunities for trade including perishable goods and tourism.
3. They are aiming to begin flights to London in November but still need to complete a number of processes before this can take place.
4. UK-EAC EPA – Negotiations for a UK-EAC trade deal continue. Kenya has already acceded to the deal. Uganda has indicated that they would be interested in joining, however elections delayed things, but now a new cabinet has been announced, negotiations will restart soon.
5. Covid-19 Support -The UK helped lead the creation of COVAX, which is expected to provide vaccines for 20% of Uganda’s population; is one of its largest donors (£548m); and continues to advocate for fair access to vaccines globally.

Added further that £594m worth of commercial deals is expected in the next 12 months in a range of sectors including agricultural facilities, urban roads, rail locomotives and transmission lines.”