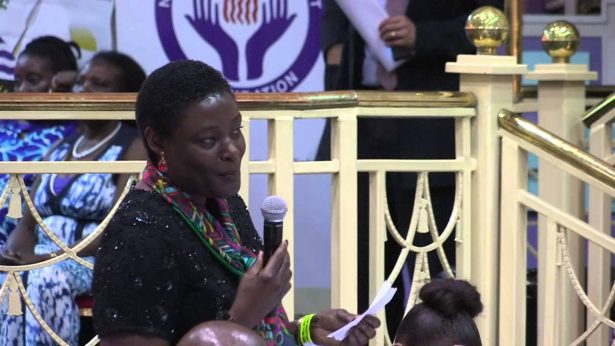 Cecilia Barbara Atim Ogwal, commonly known as Cecilia Ogwal, is a Ugandan politician, businesswoman and management consultant. She is the Member of Parliament for the Dokolo District Women’s Constituency. She has been a member of Uanda’s legislature, continuously since 1996.

She was born in Dokolo District, Northern Uganda, on 12 June 1946. She attended local schools in Uganda. In 1967, at the age of 21, she was admitted to the University of East Africa in Nairobi, (it is now known as the University of Nairobi), to study for he degree of Bachelor of Commerce. She graduated from Nairobi University in 1970. She also holds the Certificate in Human Resources Management from what was then called the Institute of Public Administration, but is now known as Uganda Management Institute. She holds two other certificates; one in Christian Based Values from the Haggai Institute, Singapore, and the other in Public Private Partnership (PPP), from Australia.[1][2]
Career

From 1979 until 1980, she worked at the Uganda Embassy in Kenya, as the Liaison Officer for Returning Ugandan Refugees. From 1980 until 1981, she worked as the Operations Manager at the Uganda Advisory Board of Trade. In 1982, she was one of the founders of Housing Finance Bank, working there until 1984. She served as the Chairperson of Uganda Development Bank, from 1981 until 1986.

She became involved in Uganda’s politics, serving as the Acting Secretary General of Uganda People’s Congress (UPC), beginning in 1985 until 1992. In 1994, she was part of the Constituent Assembly which drafted and promulgated the 1995 Ugandan Constitution. She remained a high-ranking official in the UPC political party until 2004. During the 2006 parliamentary elections, she lost her Lira Municipality seat to Jimmy Akena, the son of UPC founder Milton Obote. In 2011, Cecilia Ogwal contested and won the Women’s Representative seat for the newly created Dokolo District. This time she switched political parties and ran as a member of the Forum for Democratic Change party.