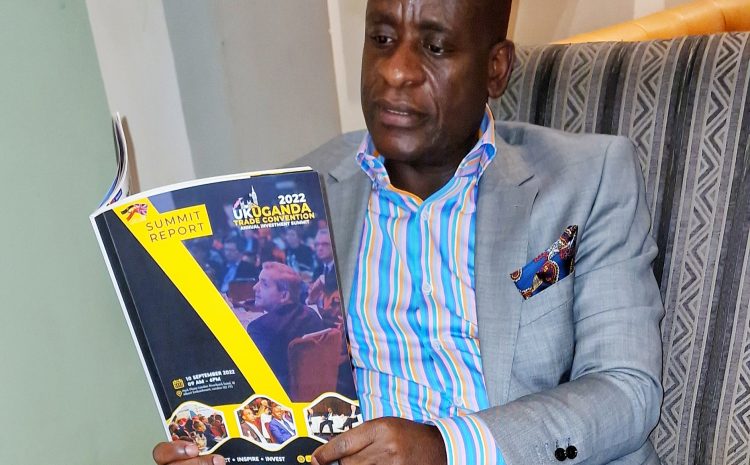 I take great pleasure in thanking all those who spared their valuable time to attend the 12th Uganda-UK convention, despite all the difficult circumstances following the death of Her Late Majesty Queen Elizabeth II, unfortunately, in line with UK Government mourning guidance for civil servants, both Uganda and UK government officials would not participate at the event.

Despite all that, the organising committee decided to continue with the event and I also thank those that couldn’t make it, for the tremendous support everyone gave, even in their absence.

We are happy that the annual event has grown from strength to strength, now becoming the only African focused trade and investment summit running for 12 consecutive years. He echoed and urged Ugandans to emulate his spirit of patriotism and invest not only time but also money for the good cause of giving back to Uganda. “We can’t wait for governments to put money in everything we do, their blessing and participation is enough”.

As the founder and chairman, I have received many accolades, awards and recognitions because of the convention and my work in the community and I was this year happy to be recognized by Director Citizenship & Immigration Control, presented to me by Maj. Gen. Apollo Kasiita-Gowa. It was the UK Convention with Rt Hon Rebecca Kadaga that started lobbying the government via the parliament for the Dual Citizenship and a few other policies that impact Ugandans in the Diaspora. The government agreed not only for the dual-citizenship but also for the Directorate of Citizenship & Immigration Control to designate a staff at various major embassies and commissions.

This year, I also joined fellow Ugandan Asian brothers and sisters at a reception hosted by His Majesty, King Charles III at Buckingham Palace, commemorating the 50th anniversary of the Resettlement of British Asians from Uganda in the United Kingdom.

At the summit’s deliberations I noted some key points that I wanted to share briefly in my remarks as follows: I noted from Lord Popat’s, (Prime Minister’s Trade Envoy to Uganda) presentation that UKEF is financing up to £2bn to support projects in Uganda. Total trade in goods and services (exports plus imports) between the UK and Uganda was £232 million to the end of Q1 2022 and according to the Office for National Statistics, UK investment in Uganda was valued at £214 million in 2020, an increase of nearly 49 per cent on 2019 levels. The UK recently launched trading framework for Developing Countries Trading Scheme (DCTS), coming into force from 2023. Under the DCTS, over 99% of all goods exported from Uganda will be eligible for duty-free access to the UK, potentially saving over £600,000 of tariffs each year. Hon. Janet K. Museveni, the 1st Lady and Minister of Education & Sports invited investors to invest in various education and sports opportunities including: University education, Physical education and sports, Consultancies and Information and communication technology.
Nexus Green with the support of the UK Government through UK export finance, raised over 100 million Euros to be able to blanket Uganda with the solar irrigation systems to allow farmers to generate sustainable farming, create high value crops to be able to export to countries like the UK. One of the focused sectors was the oil and gas sector in Uganda. Investment in the sector is one of Uganda’s big projects onshore in the world, 6 billion barrels of oil reserves in place, which has been found, of which 1.6 currently could be recovered. There is an opportunity of an investment between $15 to $20 billion, which is going to come through the upstream, that is, getting the oil onto the ground; the midstream, transporting and refining the oil; but also, the downstream and also some of the facilities that we have seen like the Kabaale airport, the roads and several other projects. I was excited about comments by Richard Burge, Chief Executive of the London Chamber of Commerce and Industry. He encouraged African governments and businesses to export value-added component within Africa, so that the money stays inside the country, in this case in Uganda, rather than being run by people who do relatively little but take most of the value elsewhere. He stressed the importance of skilling as it is a commodity in itself to sell. He said that Sustainability is part of environmental, social, and corporate governance. “Be careful what you promise, the world of sustainability, as ESG is now coming under a very robust scrutiny. Do not claim things that you are not delivering. And be very careful that when you claim sustainability in one angle, you will not be compromising your sustainability credentials by not being careful in other angles, so be ruthless in interrogating yourself, because somebody’s going to interrogate you for it.”

One of the speakers, Andrew A Blanch, MD, Alvan Blanch Development said that if we’re going to need to find opportunities for the youth in agriculture beyond cities, we need types of projects that can generate new industries in rural areas. Because the great thing about rural employment and enterprises is that they’re using local materials.

Amin Mawji OBE, Aga Khan Development Network emphasized that Ugandan diaspora real value, is not the financial capital. “The real value is in the knowledge capital. If we can get Ugandans who are outside of Uganda to bring their knowledge and their experience, that’s a huge asset that Uganda could do with. Aga Khan is building hospitals at the moment in Uganda and there is a huge shortage of high-quality medical practitioners. But we also know that some of the best medical practitioners in the world are Ugandans. If we can convince that group of people to come back to their country of birth, and work in Uganda, I tell you, it will be transformational.”

Thank you so much.